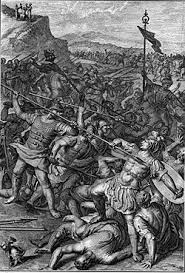 Armed with the knowledge that God would go with them and they would both overtake and defeat the raiders, David and his men set out after them.  Along the way they met a man wandering in a field.  They learned from the man that he was an Egyptian slave of the Amalekites.  He had been deserted when he became ill, three days before.  But, he knew where the raiders were and was willing to lead David and his men to them if they would spare his life and not turn him over to his former slave owner.

God enabled David and his men to overpower the Amalekites and all of the wives and sons and daughters and all the animals and valuables were recovered.  There were additional flocks in the possession of the Amalekites that David recovered and later distributed to various towns that he and his men had visited. [Reflection based on the Bible Reference – 1 Samuel 30:7-31]