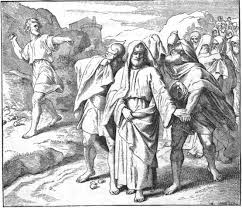 As King David and company fled Jerusalem to avoid a battle with Absalom and his fighters, a man named Shimei, from the clan of Saul, approached and hurled both insults and stones at David, his officers and the warriors that surrounded him.  He accused David of being a murderer and said David stole the throne from Saul.  This was not a brief encounter; but, as David and company continued along the way, Shimei kept pace and continued throwing stones and tossing dust into the air.  David was asked by his warriors if they should silence him and he replied, we have worse problems…my son is trying to kill me.  Let God decide.  [Reflection based on the Bible Reference – 1 Kings 2:8-9]