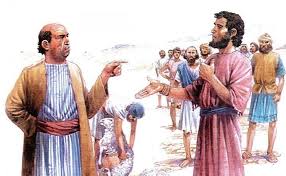 Nabal, a descendant of Caleb, was a wealthy man who lived in the city of Maon, located nine miles south of Hebron. He owned a thousand goats and three thousand sheep.  He was known in the area as a man that was rough and mean and difficult in his dealings with other people.

David sent ten of his men to Nabal reminding him of the favorable relations between his men and Nabal’s shepherds and asked if he could show kindness in providing some food for his men.  Nabal acted as if he had never heard of David and suggested that perhaps he was some runaway slave.

After the sheep-shearing was completed, Nabal held a celebration, acting like a king.  The next day, when he learned that his wife Abigail had prevented his destruction, God caused his heart to fail.  He became like stone and ten days later he died.  [Reflection based on the Bible Reference – 1 Samuel 25:2-38]