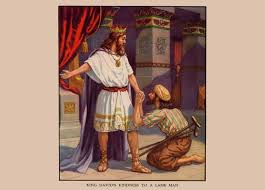 King David asked if anybody from King Saul’s family was living because he wanted to show kindness.  He was told that there was a son of Jonathan named Mephibosheth that was living.  But, unfortunately, when Mephibosheth was an infant, news of a battle in which his father, Jonathan, and grandfather, Saul, were killed, got back to the palace and in the panic Mephibosheth’s nurse dropped  him and his legs or ankles were broken.  He became permanently crippled.  David restored all of Saul’s property to Mephibosheth and provided a place at his table, just like David’s sons. [Reflection based on the Bible Reference – 2 Samuel 9:1-13]