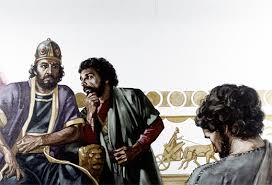 Ahithophel was one of King David’s trusted counselors; that is, until Absalom became increasingly popular among the Israelites.  Faced with a choice of remaining faithful to David or supporting his son, Absalom, he chose Absalom.  David was informed of Ahithophel’s traitorous defection; and he asked God to make Ahithophel’s counsel to Absalom foolish.

Hushai, a faithful counselor to David, was willing to go to Absalom, pretending to support Absalom, but really supplying information back to David.  Absalom asked for advice from both Ahithophel and Hushai regarding pursuit of David.  Absalom accepted Hushai’s advice, which took longer to implement, giving David and his followers time to get further away from Jerusalem and establish a defense against attack.  Ahithophel couldn’t accept the rejection of his advice; so, he left Absalom and returned to his home and hanged himself.  [Reflection based on the Bible Reference – 2 Samuel 15:12-17:23]