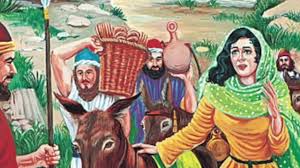 Abigail was the wife of Nabal, a mean, surly and self-centered man.  While David and his men moved about in the mountains and wilderness of Ziph, they kept a watchful eye on Nabal’s fields and protected his shepherds.

Abigal received a report that her husband had insulted David’s men even though they had protected Nabal’s shepherds and flocks from invaders.  Fearing retribution for her husband’s ill-behavior, Abigail prepared food for David and his men.  When she met David she asked him to honor God and maintain a blameless heart.

David was grateful for Abigail’s advice and for God blessing her with wisdom.  Her husband, Nabal, unaware of her intercession on his behalf, was celebrating the end of the shearing season by becoming drunk.  The next morning when he learned of the previous day’s events, his heart failed him and within ten days he died.  [Reflection based on the Bible Reference – 1 Samuel 25:2-38]