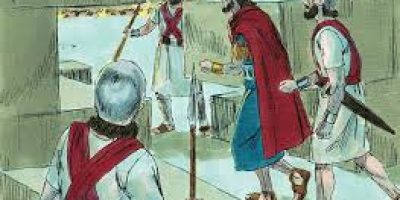 For more than a year, Nebuchadnezzar’s troops had surrounded the city of Jerusalem, preventing any food from coming into the city.  Jeremiah told King Zedekiah that God assured him that Zedekiah’s life would be spared and the city would be spared if Zedekiah would surrender to the Babylonian officers.  Zedekiah was unwilling to accept God’s offer.

On this day, the Babylonians had breached the city wall; and Zedekiah knew the city would be destroyed.  That night he and his army slipped out a gate between the city walls near his palace.  They made it as far as Jericho before the Babylonian army caught them.  Zedekiah was forced to watch the execution of his sons before his eyes were gouged out and then put into prison.  [Reflection is based on the Bible Reference – 2 Kings 25:1-7]