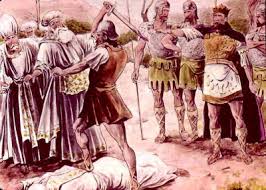 “When I was at Nob,” Doeg said, “I saw David come to Ahimelek, the priest.  Ahimelek spoke to God on behalf of David; then he gave provisions and the sword of Goliath to David.”

With that statement, King Saul was convinced that Ahimelek and David were part of a conspiracy against him.  Somehow, he thought, Ahimelek and David were plotting his destruction.  As a result, he ordered Ahimelek and his family to appear before him and account for their actions.  Nothing Ahimelek could say was going to change Saul’s mind and he ordered his guards to execute Ahimelek.  They refused, so he turned to Doeg and ordered him to be the executioner.  Doeg, an Edomite, carried out the order, which included Ahimelek and his family, for a total of eighty-five men.  This fulfilled God’s promise that Eli’s descendants would face destruction. [Based on the Bible Reference 1 Samuel 2:27,36, 1 Samuel 22:6-19]