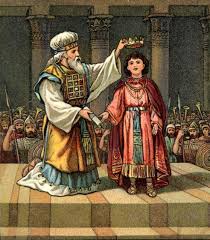 Jehoiada, a High Priest in Jerusalem, was the husband of Jehosheba, a daughter of King Jehoram and Athaliah.  Upon Jehoram’s death, his son, Ahaziah became king of Judah.  When Ahaziah was killed by Jehu, Athaliah seized the throne and became Queen of Judah.  To prevent any of the grandsons from challenging her claim to the throne, she had them all killed, or at least she thought.  Her daughter, Jehosheba, hid one of the grandsons, Joash, and his nurse in a bedroom and later transferred Joash to the temple under Jehoiada’s care.  Jehoiada raised Joash in the temple, hidden from public view and knowledge, until Joash was seven years old.  At that time, Joash was anointed king and Athaliah was executed.  Jehoiada lived to the age of one hundred thirty and continued to counsel Joash in the ways of the Lord.  [Reflection is based on the Bible Reference – 2 Kings 11:1-21]