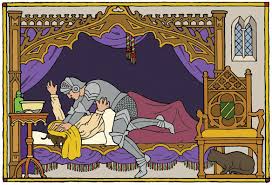 “What did Elisha say to you? King Ben-Hadad asked Hazael.  “He said you would certainly recover.”  But he didn’t reveal the rest of Elisha’s prophecy.  Elisha’s words kept replaying in his mind.  “Me, king?  When?  How?  I’m not his son.”  He didn’t sleep well that night, because he couldn’t see any way that he would become king unless he made it happen.  But how?  By morning he had decided his course of action.  Early, before many people were around, he took a heavy cloth, soaked it in water and covered the king’s face.  Shortly, thereafter, he alerted the attendants and then court officials that the king was dead and God had said through the prophet Elisha that I will be the king.  [Reflection based on the Bible Reference – 2 Kings 8:13-15]