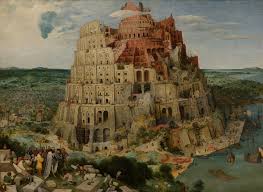 The story of the great flood that destroyed all plants and animals; and the safety of Noah’s family on the ark, was told and retold from generation to generation.  But within the lifetime of Noah, many people forgot the reason for the destruction, which was wickedness and a rejection of God, the creator.

Against the counsel of Noah and a rejection of God’s will that mankind should form many nations, the majority of people joined in an effort to build a tower that would display their technical capabilities and encourage people to live in a concentrated area.

In response, God created confusion with their language, to the point that they could not understand each other.  What the people tried to prevent is what happened.  They scattered according to their language.  [Reflection is based on the Bible Reference – Genesis 11:1-9]