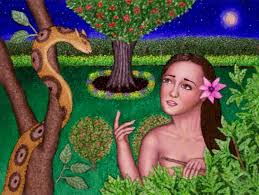 Satan, in the form of a serpent suggested to Eve that eating of the fruit of the tree in the middle of the Garden would make her like God.  The idea of being like God held an appeal to Eve.  She thought, all she needed to do was eat some of the fruit from the forbidden tree and she would know everything and could do anything.  The more she thought about it, the more she liked the idea.

Each of us are tempted by Satan to do things we want to do, rather than what God wants.   The choice is ours to make.

“You certainly won’t die; but, your eyes will be opened and you will be like God, knowing good and evil,” the serpent responded.  “Being like God” held a great deal of appeal.  The more she thought about it, the more appealing it became; until, she did what she was thinking about.  She tasted the fruit and gave some to Adam.

Death and sorrow became their companions.  Death to their relationship with God.  Sorrow for the lost blessings.  Cast out of the Garden, they faced a life of pain and struggle.  [Reflection based on the Bible Reference – Genesis 3:1-24]