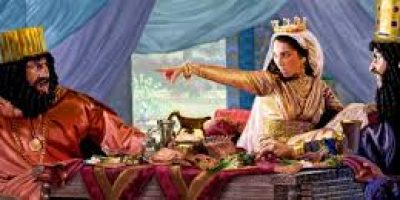 Somehow, things just weren’t going the way Haman had hoped.  By now, he had hoped that Mordecai would be hanging from the gallows he had built beside his house.  Instead, Mordecai was honored by the king.  Now he hears Queen Esther talking, saying: “I and my people have been sold to be killed; all of us.”  “Who would do such a thing?” King Xerxes wanted to know.  And then it happened, the Queen pointed her finger at Haman and said, “That evil and vile man!”  The king was so angry he immediately got up from the table and went out to the garden.  Haman’s only hope was for the queen to save him, so he threw himself on her, hoping to obtain mercy.  Returning, the king saw what appeared to be Haman trying to molest the queen and he shouted for an attendant.  Immediately, the servants covered Haman’s head and the king’s personal servant said, “Your Majesty, Haman built a tower seventy-five feet high, to hang Mordecai, the man who saved your life.”  “Hang Haman on his own gallows,” the king said.  [Reflection is based on the Bible Reference – Esther 7:1-10]