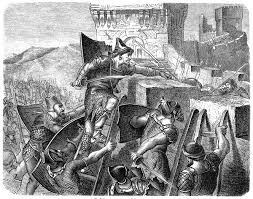 “Come, let’s face each other in battle,” said King Amaziah’s messengers to King Jehoash.  “Look,” Jehoash replied, “You defeated Edom’s army and now you feel like you can conquer anybody. Stay home!  Don’t ask for trouble for you and your people.”

But, Amaziah continued to provoke Jehoash until the Syrian army granted his wish.  The battle was a disaster for Judah.  Amaziah was captured and he was forced to watch the Syrians destroy part of the wall around Jerusalem and take away gold and silver from the temple and treasured items from the royal palace.  [Reflection is based on the Bible Reference – 2 Kings 14:1-14]