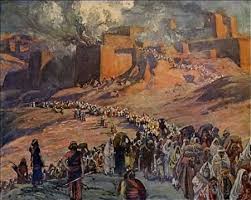 Zedekiah was established as a puppet king of Judah by King Nebuchadnezzar of Babylon, following the second deportation of select inhabitants of Jerusalem.  Those deported included the king and his family, attendants, court officials, thousands of skilled workers and thousands of trained soldiers.

Zedekiah made a series of devastating choices: 1) He chose to ignore the commands of God and instead pursued the evil practices of his predecessors; 2) He chose to rebel against King Nebuchadnezzar, the person that placed him into the position of king; and 3) He chose to ignore the counsel of the prophet Jeremiah, who instructed him that God had promised if he would surrender to King Nebuchadnezzar, his life would be spared and the physical city of Jerusalem would be spared.

The result of all the bad choices was that he was captured, made to watch his children executed, then blinded and left to think about all the bad choices he had made.  The city of Jerusalem was destroyed by fire, including the temple that Solomon had built over 400 years before.  [Reflection is based on the Bible Reference – 2 Kings 24:18 – 25:21 and Jeremiah 38:17]