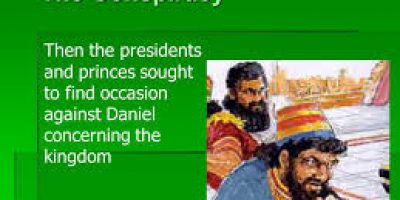 “I overheard them talking---some of the royal court administrators and governors---one of them said, ‘I’ve had some of the clerks double check his entries in the records; but they couldn’t find any mistakes. Another volunteered that he had someone follow Daniel around; but, he never heard Daniel say anything inappropriate.’  Someone said, ‘Do you notice how everybody seems to like him?’ ‘Well, I don’t care,’ one said, ‘It’s just not right that a Jewish captive should have such a high position and now the king is thinking about promoting him to be over the whole realm.’  ‘I have an idea,’ somebody said.  ‘If we can get the king to sign a decree that it’s unlawful to worship any god other than King Darius for a thirty day period, I’m sure Daniel would violate that law.  And, if we can get the law to be binding by the rule of the Medes and Persians, the king will not be able to reverse the decree.  The penalty for violation should be casting the violator into the lions den.  The scheme was put into action and the king signed it into the law of the Medes and Persians. [Reflection is based on the Bible Reference – Daniel 6:1-9]