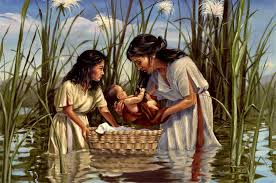 Jochebed, a young Israelite mother gave birth to a baby boy.  For the first three months of the baby’s life he was kept hidden from the Egyptian authorities, for the king of Egypt had ordered that male Israelite babies were to be killed.  This was part of a failed scheme to limit the growth of the Israelite population.

Inspired by the Spirit of God, Jochebed constructed a basket coated with tar and pitch.  She put the baby into the basket and hid the basket among the reeds along the river Nile.  The baby’s older sister was to keep a watchful eye on the basket.  Along came the daughter of the king and she saw the basket.  She had an attendant bring the basket and open it.  There was an Israelite baby that was crying; and Pharaoh’s daughter felt sorry for the baby.