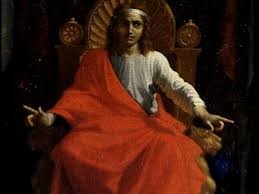 While Adonijah was hosting a feast at which he planned to declare himself the king, Nathan, the prophet, advised Bathsheba to remind David of his promise that Solomon would sit on his throne.  While Bathsheba and David were discussing this, Nathan entered and announced that Adonijah was presently hosting a feast and was preparing take the position.

King David instructed Zadok, the priest to anoint Solomon as the king and have him sit on his throne.  When word of Solomon sitting on the throne reached the people at the feast, they immediately departed and Adonijah begged Solomon to spare his life. [Reflection based on the Bible Reference – 1 Kings 1:5-53]