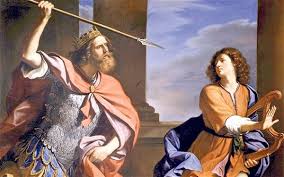 Tens of thousands?  That phrase kept echoing through his mind, ever since he heard the women chanting, “David has slain his tens of thousands.”  Isn’t it enough that God is not pleased with my role as king?  Must I listen to the people chanting how much better David is than me?  Over and over Saul heard this until he thought his head would explode.

The evil spirit in Saul altered his ability to think clearly.  Somehow, he began to see David as a competitor.  How could he make this threat go away?  His attempts on David’s life failed; so he placed David in command of a thousand troops and sent him into battle against the Philistines; thinking the Philistines would succeed in capturing or killing David.  [Reflection based on the Bible Reference – 1 Samuel 18:10-17]