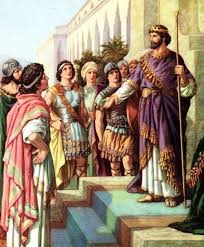 Rehoboam, son of Solomon became king in 930 BC.  Jeroboam, who had been part of Solomon’s court, along with a delegation from the northern tribes, met with Rehoboam to seek relief from the burden of heavy taxation and forced labor.  Following the foolish advice of some of his counselors, Rehoboam insulted the delegation from the north by saying, “Your taxes will be increased and you will work harder.”  The ten tribes from the North refused to accept these conditions and they withdrew their support of Rehoboam and they established their own king, Jeroboam.  The result: A permanent division, Israel in the north and Judah (the tribes of Judah and Benjamin) in the south.  [Reflection based on the Bible Reference – 1 Kings 12:1-17]