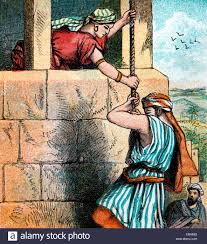 Two Israelite men were sent by Joshua to look over the land, with a special interest in the city of Jericho.  Led by God, the men went to an inn owned by a woman named Rahab.  Her heart was stirred by the Spirit of God and later she went to the place where she had hidden them and confessed her belief in God, his power and all that He had done for the Israelites.

An arrangement was made for the men to escape through a window and over the wall; but not before an agreement was made for sparing the life of Rahab and any in her family that would be in the house when God would give them the city.  [Reflection based on the Bible Reference – Joshua 2:1-24]