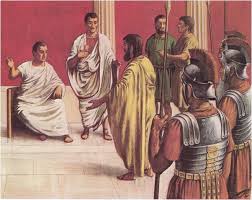 Two years after Paul had appeared before Governor Felix, Paul continued to be retained, under guard, within Herod’s palace in Caesarea.  Felix was replaced by Festus and within three days of assuming the position, Festus visited the chief priests and Jewish leaders in Jerusalem.  They asked that Paul be transferred to Jerusalem, for it was their intent to ambush and kill Paul while in-transit.  Festus denied the request; but offered to hold court in Caesarea.  Again, the Jewish leaders were unable to provide any evidence of a crime committed by Paul.  When Festus asked Paul if he would like to continue the inquiry in Jerusalem, Paul stated that he was a Roman citizen being tried within the Roman courts and he appealed for his case to be forwarded to Caesar. [Reflection is based on the Bible Reference – Acts 25:1-12]