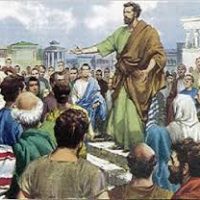 When Paul arrived in Athens, he walked around the city and saw that there were a great many idols.  He noted that one of the idols was “To An Unknown God.”  The philosophers in Athens heard that Paul was talking about a God with which they were unfamiliar.  They asked him to tell them more in a public meeting to be held in the Areopagus [a hill where the governmental council and city elders met].  Paul explained to them that the identity of the unknown God is known and he taught them about the life, death and resurrection of Jesus.  A number of people became believers.  [Reflection is based on the Bible Reference – Acts 17:16-34]