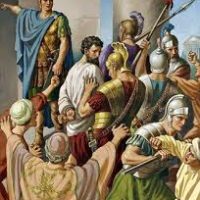 News reached the commander of the Roman garrison stationed in Jerusalem that there was a riot in front of the temple.  Quickly, the commander and some of his troops rushed to the scene to find a mob beating on a man.  Thinking the man must have committed a crime, the soldiers were ordered to place the man under arrest and put him in chains.  When they asked the man who he was and what he had done, it was impossible to hear Paul’s response because the noise of the crowd was overwhelming.  To establish order in the city, the soldiers were instructed to take Paul to the barracks, for further questioning.  The crowd continued to act violently, requiring that the soldiers had to carry Paul and force their way to the barracks.  [Reflection is based on the Bible Reference – Acts 21:27-36]