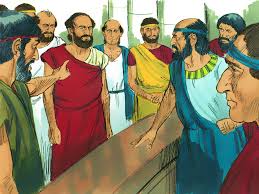 Upon arrival in Thessalonica, a man named Jason welcomed Paul and Silas into his home.  For the next three Sabbaths, Paul taught in the local synagogue.  Some Jews and many Greeks became believers.  Some of the unbelieving Jews, however, went into the marketplace and found enough people of questionable character that a mob was formed.  The mob went to Jason’s house for the purpose of bringing Paul and Silas out; but when it was discovered that Paul and Silas were not there, Jason was dragged out and brought before the city officials on charges that they were accomplices in violating Caesar’s authority.  [Reflection is based on the Bible Reference – Acts 17:1-9]