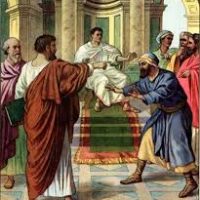 The Proconsul, Sergius Paulus wanted to hear Paul’s teachings about God.  Because Elymas was influential in the region, he tried to prevent the Proconsul from receiving the faith.  Paul, filled with God’s Spirit, looked directly at Elymas and told him that he was filled with Satan and deceitful ways and that he would become blind.  When people saw this happen, many people, including the Proconsul turned to God for a Spiritual rebirth.  [Reflection is based on the Bible Reference – Acts 13:6-12]