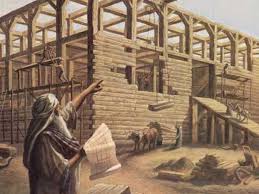 Noah was faithful to God at a time when wickedness and violence was everywhere.  God saw something in Noah that He could use to accomplish His will.  But it would require strengthening Noah’s faith.  So, He said to Noah, “I want you to become a builder.”  With that He gave instructions on how to build an ark.

The ark was to be 450 feet long, 75 feet wide, and 45 feet high, three levels inside with a series of rooms around the periphery.  All the cracks were to be sealed, both inside and out with a pitch; because the ark needed to be watertight for a flood that God would send.

It took many decades to complete because help was limited to family; everybody else thought Noah had lost his mind.  This didn’t stop Noah and whenever he saw somebody he would warn them of the coming destruction and the need to change their way of living.  [Reflection based on the Bible Reference: Genesis 6:9-22]