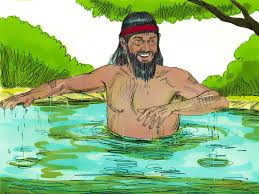 “He could cure him of his leprosy,” said the servant to her master.  She knew, because she had lived in Israel before she was captured by the Syrians.  She became a servant to Naaman’s wife.  Naaman was the commander of the army; and he had leprosy.

Naaman was disappointed and angry about the meeting with Elisha.  He felt insulted.  Elisha didn’t bother to meet with him; he sent his servant with a message.  The instructions seemed pitiful…dip in the Jordan River seven times.  There were much nicer rivers in Syria.  Fortunately, for Naaman, his servants convinced him to follow the instructions that were provided by God, through his servant Elisha.  [Reflection based on the Bible Reference 2 Kings 5:1-14]