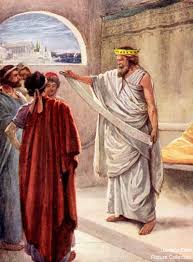 I’m King Artaxerxes, ruler of the Persian Empire since the assassination of my father Xerxes [who reigned from 486-465 B.C.] [History will show that Artaxerxes reigned 465-424 B.C.] [More history: The temple construction was completed in 515 B.C. during the sixth year of Darius I]  I received a letter from the field commanding officer, Rehum and Shimshai, the scribe, in which they stated that the Jews that had been captives in Babylon, were rebuilding the city of Jerusalem.  They pointed out that this has been a rebellious city and was the reason it had been destroyed.  I reviewed the records and found these statements to be true and I ordered that the rebuilding of the city be stopped.  [Reflection is based on the Bible Reference – Ezra 4:7-23]