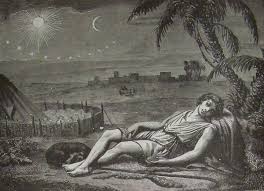 Joseph said to his brothers, “Listen to this dream I had: We were binding sheaves of grain out in the field when suddenly my sheaf rose and stood upright, while your sheaves gathered around mine and bowed down to it.”  His brothers interpreted that this implied that Joseph would rule over them; and they hated him even more.

Later he shared another dream with his brothers and father.  In this dream the sun, moon and eleven stars bowed down to him.  His brothers were jealous; but, Jacob didn’t quite know how to react.  He didn’t understand that these dreams were sent by God; so, he kept this in his mind.  [Reflection based on the Bible Reference – Genesis 37:5-11]