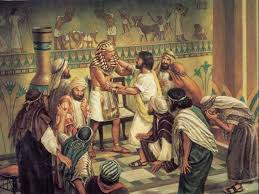 Joseph’s brothers arrived in Egypt a second time, with money and gifts for the purpose of obtaining approval from the Governor, so that they could secure the release of their brother Simeon from prison and purchase grain to take back to Canaan.

Immediately, Joseph (whose identity was not known to his brothers) recognized that Benjamin was with them.  He arranged for them to share a meal with him at his residence.  His brothers, rather than being pleased with the arrangement, were frightened that they were in trouble for stealing; because the money from their previous purchase was in their grain sacks.  The palace manager assured them that he had received the money for the previous purchase and that it must be their God that put the money in their sacks.

Joseph was gracious in hosting his brothers; inquiring about the health of their father.  The brothers couldn’t help but notice that Joseph arranged their seating in the order of their birth.  How could a stranger know that?  Was it simply a coincidence?  What a relief when they were ready to leave.  Their mission was accomplished…they had Simeon and Benjamin and plenty of grain.  Their father would be happy.  [Reflection based on the Bible Reference – Genesis 43:15-44:1]