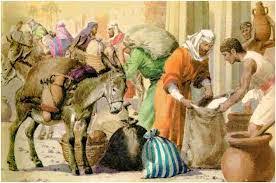 As the famine continued, the people of Egypt purchased grain until their money was exhausted.  When the money was gone Joseph arranged for the ownership of cattle, possessions and land to be transferred to the Pharaoh in exchange for grain.  Finally, the people of Egypt became servants of Pharaoh.  Joseph arranged that one-fifth of all future harvests would go to the king and the remaining four-fifths would be for planting seed and food. [Reflection based on the Bible Reference – Genesis 47:13-26]