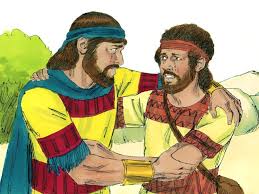 Jonathan had just heard his father, King Saul, say to his attendants that they were to kill David.  Jonathan considered David like a brother and he warned David to hide until he could speak to his father on David’s behalf.

When Jonathan and his father met, Jonathan reminded Saul that David had risked his life to battle Goliath, the Philistine; and the Lord enabled David to inflict great losses on their Philistine enemies.

After listening to his son, King Saul promised not to harm David and they were reunited, with David playing the lyre in the king’s presence…for a while.  [Reflection based on the Bible Reference – 1 Samuel 19:1-7]