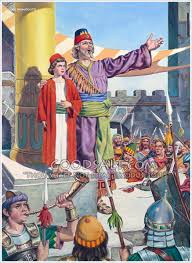 In 841 BC a woman murdered the grandsons of her deceased husband who had been the king.  After her husband died, her son became the king; but he was killed, leaving the throne vacant.  The woman, her name was Athaliah, thought to herself, “I could be the Queen.  After all, I’ve been around kings all my life.  I know how it’s done.  Just one problem…One of the grandsons might challenge my claim to the throne.  I need to get rid of them.”

When the evil deed was done, she thought she eliminated them all; but her daughter hid one; and her husband, the High Priest, raised him in the temple, unknown to the public.  The grandson’s name was Joash; and at seven years of age, he was anointed and established as king.  The High Priest ordered the execution of the Queen grandmother.  The High Priest lived until he was one hundred thirty years old.  For all of his life he counseled Joash on the ways to honor God.  [Reflection is based on the Bible Reference – 2 Kings 11:1-21]