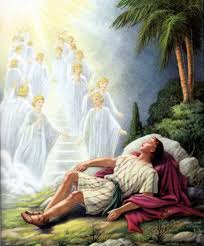 Sent away from Isaac and Rebekah to avoid being killed by his brother Esau and to avoid marrying a local Hittite woman, Jacob no longer has the support of a wealthy family.  Aware of his vulnerability, when he laid down to sleep, at the end of a day’s journey, he had a dream.

In the dream he saw a stairway leading to Heaven.  He heard the Lord’s voice telling him that he would have many descendants and the Lord would go with him and watch over him and bring him back to this land.  Jacob was humbled that God would speak to him.  In response to God’s faithfulness he made a vow of obedience and service to God.  [Reflection based on the Bible Reference – Genesis 28:10-22]