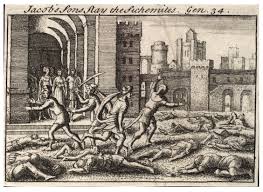 It’s not known if Dinah had God or Jacob’s approval to visit the women of Shechem.  For, while she was there, she was spotted by Shechem, the son of Hamor, the ruler of the area.  Shechem was not a God-fearing man because he kidnapped and raped Dinah.

In return, some of Dinah’s brothers made deceitful promises to Shechem and his father that resulted in the death of all the men in the village.  They followed with seizing all the flocks and herds and looting the houses and carrying off all the women and children.

What was Jacob’s reaction?  He said, “You have made us obnoxious to the people of this land.”  [Reflection based on the Bible Reference – Genesis 34:1-30]