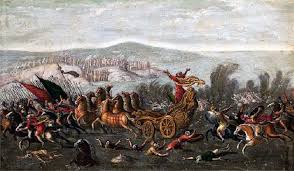 When Eli, the priest learned of this, he fell off his chair, broke his neck and died.  Meanwhile, wherever the Ark was placed in the Philistine cities, there was an outbreak of tumors among young and old.  Eventually, the Philistines sent the Ark back to the Israelites.

When the Israelites turned back to God, Samuel said, “Get rid of the foreign gods, commit yourselves to God and Him only, and He will deliver you out of the hands of the Philistines.”  God subdued the Philistines and the Israelites were at peace.  [Reflection based on the Bible Reference – 1 Samuel 4:2-7:13]