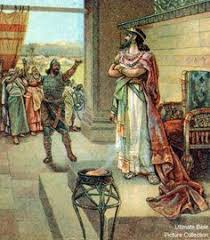 “Who said that?” the crowd from Israel demanded.  “I did,” Adoniram retorted.  “And who are you” the crowd wanted to know.  “I’m in charge here, now get to work!”  Perhaps, the verbal scuffle between Adoniram, King Rehoboam’s officer in charge of forced labor and the Israelites went something like that.  The scriptures record that the end result was that the crowd stoned Adoniram to death.  A number of people witnessed this, including King Rehoboam, who scrambled for his chariot and fled back to Jerusalem.

Once back at Jerusalem, Rehoboam mustered 180,000 troops, to battle Israel. He was restrained, however by the prophet, Shemaiah, who informed them, God forbid them to battle their brothers, because this was His doing.  [Reflection based on the Bible Reference – 1 Kings 12:16-24]