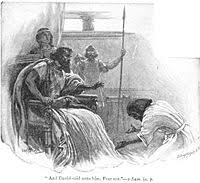 Abner, Saul’s Commander, chose to disregard God’s will for the kingship of David.  Instead, Abner anointed Ish-Bosheth, one of Saul’s sons to be king of Israel, except for Judah.  This led to an ongoing rivalry between Abner and David’s Commander, Joab.  The rivalry resulted in the loss of the lives of Abner, Joab and Ish-Bosheth.  [Reflection based on the Bible Reference - 2 Samuel 2:8-4:12]