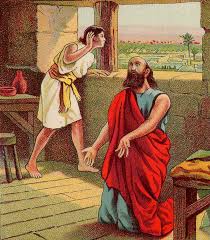 When the soldiers arrived, Elisha asked God to strike them with blindness.  Then he led them into Samaria.  When they arrived in Samaria, God restored their sight.  “How did we get here,” they wondered.  And then another surprise…instead of being executed, they were fed a meal and sent on their way.  [Reflection based on the Bible Reference – 2 Kings 6:6-23]