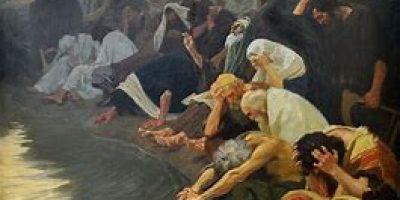 Unable to worship in the temple, because, now, they are living in a foreign land (Babylon, nine hundred miles from home), the Jews met by the Euphrates River or its many canals with running water.  There they wept for what they had, but no longer have.

The Babylonians had seen that a number of the Jews brought with them harps; and they coaxed the Jews to sing.  But, how could they sing songs of joy while they were living in a foreign land…a land that worshipped pagan gods.  This was the reason God had punished Jerusalem…because they had turned from God to the pagan gods.

Only God could restore them to their homeland.  And, Ezekiel said God would return them; but, after seventy years of captivity.  Some of them would not survive to see that day; but, they needed to be faithful to God, so their children would be able to return to a renewed homeland. [Reflection is based on the Bible Reference – Psalm 137:1-6]