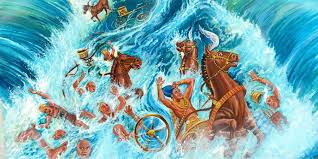 When the Israelites had crossed over to the other side, God lifted the cloud and the Egyptians pursued the Israelites.  When the entire Egyptian army was in the middle of the Red Sea, God caused confusion within the Egyptian army.  The wheels of the chariots became stuck.  Some of the troops were trying to go back while others were going forward.  With that, God released the waters and the entire Egyptian army was covered by the water.  There were no Egyptian survivors.  [Reflection based on the Bible Reference – Exodus 14:19-31]