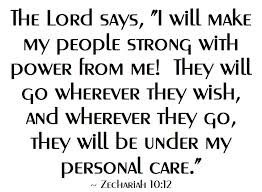 Near the end of Samuel’s life, the Israelites insisted on having a king, like other nations around them, even though they were warned of the consequences.  The leaders, both secular and religious led them into acts of disobedience against God.  For this, the Israelites in the Northern Kingdom were relocated, as captives, to Assyria.  The Israelites in the Southern Kingdom were taken as captives to Babylon, and Jerusalem, including the temple, were destroyed.  But, God redeemed a remnant of the Israelites and promised to restore them and by His power and authority make them strong and an example to all nations.  [Reflection is based on the Bible Reference – Zechariah 10]