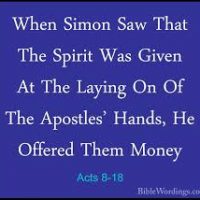 When word reached the apostles in Jerusalem that a large number of Samaritans had become believers, Peter and John went to Samaria to provide assistance.  They began by laying hands on the believers and asking God to fill them with His Spirit.  In the same city was a man named Simon who was a master at sorcery and when he saw the transformation of the believers, he wanted to buy this power so he could be more important in the eyes of all the people.  He was rebuked by Peter, who said to him, “May your money perish with you, because you thought you could buy the gift of God with money.”  Hearing Peter’s words, Simon was struck with the foolishness of the request and he asked Peter to pray that he would be spared from God’s punishment.  [Reflection is based on the Bible Reference – Acts 8:14-24]