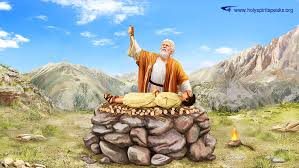 Some years passed and the bond between Abraham and his son, Isaac, grew because Abraham loved Isaac greatly.  One day, God tested Abraham’s faith.  He said, “Take your son, Isaac, whom you love very much, and go to the land of Moriah; and offer him as a burnt offering sacrifice on one of the mountains that I will show you.”

In obedience, the next morning Abraham, Isaac and two servants began the journey to the land God had told him about.  On the third day, Abraham could see the place in the distance.  He said to his servants, “Wait here with the donkey.  Isaac and I will go a bit further.  We will worship there and then we will come right back.”

Abraham placed the wood for the burnt offering on Isaac’s back and Abraham carried the knife and the fire.  When they had gone a little way, Isaac said to his father, “We have the wood and the fire; but where is the sheep?”  Abraham replied, “God will provide the sheep,” and they continued on.

When they arrived at the place where God had told him to go, Abraham built the altar, placed the wood on it, then tied his son Isaac and laid him on the wood.  When he raised the knife, to sacrifice his son, God stopped him, and said, “Now, I know you fear God and have not withheld anything from me, even your son.”  Abraham looked up and saw a ram caught by its horns in a thicket.  The ram became the sacrifice in place of his son.  [Reflection based on the Bible Reference – Genesis 22:1-19]