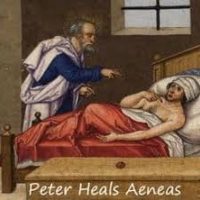 During one of Peter’s missionary journeys, God’s Spirit led him to the Judean town of Lydda where he met a paralyzed man named Aeneas, who had been bedridden for eight years.  By the power of God, Aeneas was healed and word of this miracle quickly spread throughout Lydda and Sharon, resulting in many people who became believers.  [Reflection is based on the Bible Reference – Acts 9:32-35]