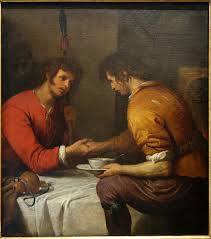 While Esau and Jacob were twins, Esau was the firstborn.  In the Jewish custom, of the time, the birthright entitled the firstborn to certain privileges.  This included a double portion of the inheritance and blessings bestowed by the father.

One day Esau came in from hunting, famished.  Jacob was cooking a stew and Esau said, “I’m starving!  Quick, let me have some of that stew!”  Jacob responded, “What’s it worth to you?  Is it worth your birthright?”

Birthright?  That’s not something Esau had thought about.  Esau and Jacob’s father was a wealthy man, with over a thousand servants.  Both of the boys were free to pursue their interests.  “What good is a birthright, in the future, when I’m hungry now,” he thought.  “Deal!”  With that he forfeited his claim to the birthright, to his brother, Jacob.  [Reflection based on the Bible – Genesis 25:29-34]