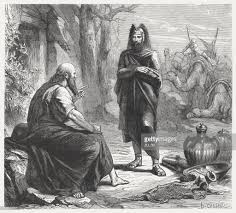 “My lord,” Hazael said to Elisha, “King Ben-Hadad requests that you ask God if he will recover from his illness.”  Elisha looked carefully at Hazael; and then he said: “Go tell the king that he will certainly recover.  Nevertheless, God has revealed to me that he will in fact die.”  Elisha continued staring intently into Hazel’s eyes, until Hazael felt uncomfortable.  Then, surprisingly, Elisha began to weep.  This was all a little much for Hazael; so he asked what was wrong.  Elisha said, “You will set fire to cities, kill young men with swords, dash children to the ground and rip open pregnant women.  God has revealed to me that you will become king.  [Reflection based on the Bible Reference – 2 Kings 8:7-13]