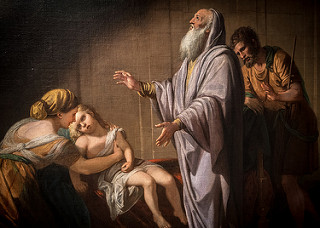 A Shunammite husband and wife hosted Elisha and his servant, Gehazi, whenever they came to Shunem.  They built a small room on the roof for them to stay.  The husband and wife were childless and the husband was an old man; nevertheless, Elisha informed them that next year about this time the wife would deliver a baby boy.  It was far beyond what she could have expected; and she was delighted.

A few years later, the boy was in the field with his father and helpers, when he developed a severe headache.  He was taken into the house and his mother cared for him; but his condition deteriorated and by noon he died.

Overwhelmed with grief, the mother hurried to Elisha, who was worshipping at Mt Carmel.  What happened next, the mother could not have anticipated or even hoped for.  Elisha, the servant and the mother returned to her home.  Elisha went into the room where the dead boy was laying and he prayed to God.  The answer to Elisha’s prayer was: God breathed life into the dead body and the boy sneezed seven times. With that, Elisha returned the boy to his mother.  [Reflection based on the Bible Reference – 2 Kings 4:8-37]