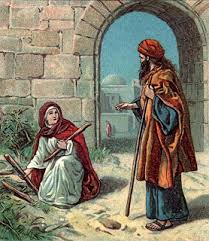 King Ahab was influenced by his wife Jezebel to worship Baal.  Elijah’s prediction that there would not be rain or dew for a very long time, may have been dismissed by Ahab; but the lack of rain over time affected crops and daily routine.  Eventually, Ahab would blame Elijah for the problem and would search for Elijah to make the problem go away.  God put Elijah out of the reach of Ahab’s jurisdiction.

God’s instruction to find a particular widow that would become a caregiver, when she was in need of care, required faith by both Elijah and the widow.  For Elijah, that God would direct him to the specific person; and for the widow, faith that after giving the last of her food to a stranger, there would be something for her son and her to eat.  God led Elijah to the widow and God moved the spirit of the widow. In faith, she cared for Elijah; and until the end of the drought her supply of flour and oil did not run out.  [Reflection based on the Bible Reference – 1 Kings 17:8-16]